This is the fascinating story about how the secret of life (DNA) was discovered and how I wish it was told in schools.

Spoiler alert! I can highly recommend watching the documentary instead of reading this blog post. It’s hard to do both the story and its key players justice in written form.

Back in the 1950s, knowledge about life was limited to what could be seen in a microscope. It was known that cells multiplied by dividing, but nobody knew how. How could the cells know what to do? It was all a mystery. Some people believed there was some magic life force that science would never uncover.

Unsatisfied with this conclusion, a group of brilliant and competitive scientists began a pursuit to find the recipe for life.

Many scientists thought they could find answers in proteins because they hold more complexity. DNA was discarded because of its simplicity.

Maurice Wilkins was only 28 years old when he joined the Manhattan-project where he worked on isotope separation for the world’s first atom bomb. On the evening after the bomb was dropped over Hiroshima the team went out celebrating. A man walked up to Wilkins at the party and said:

“I call this Black Monday. I always hoped it wouldn’t work”

That brought a different light to the circumstances and changed Wilkins forever. He had been disillusioned by the science of death and decided to focus on the science of life instead. Back in London, he started experimenting with X-rays to create diffraction images of DNA which gave the first clues to its structure.

He was later joined by the chemist Rosalind Franklin. In the beginning, she successfully helped Wilkins with this X-ray “photography”. At some point, Wilkins started to feel threatened by her competition and the duo had a fallout. They continued working on the same problem, in the same department, but did so separately without much interaction. Apart from announcing their results internally to the department.

Francis Crick and James Watson were two 22-year old complete unknowns. Many believed they were slightly crazy and certainly didn’t live up to the Cambridge standard. While most scientists carried out experiments they went for a more theoretical approach. People around them grew worried because they seemed too laid-back to ever finish their Ph D. The duo spent too much time on leisure, drinking beer , and having philosophical discussions. Nobody had much hope for these jokers.

Linus Pauling was some kind of superhuman. To summarize his career: he won the Nobel Prize twice (chemistry and peace), he published more than 1200 articles/books and he is considered to be among the most important scientists in history.

Pauling was always interested in discovering the structure of atoms and molecules, and many times he did so successfully. This made him the most recognized figure in this area at the time.

But he had a bit of an unusual approach: Pauling started off by guessing the structure of molecules followed by building ball-and-stick models. The length of the sticks was determined by the laws of physics, and based on that he tried to figure out how it all could fit together. Kind of like building a 3-dimensional jigsaw puzzle.

The Cambridge team (the oddballs) had a choice to make. Either they could spend years on experiments to find data, just like the London team. Or, they could use the same approach as the solo American: building models with a minimum amount of data. Guided by their laid-back nature the choice was easy: to try their luck with building models.

The duo spent most of the days thinking and discussing. At least they asked the right questions. One of the things that seemed common for all life was some kind of script/recipe that could be easily replicated. They thought the answer was DNA, but who did the copying? What did the script look like?

The London team, on the other hand, knew that model building was getting popular. But Rosalind Franklin put it well: “You can build models all day. But how do you prove which one is right?”. She was convinced that, if you made the measurements, did all the corrective geometry, and put them into the equations: the data would speak for itself. Only then can you get a definitive structure.

On a November day in 1951, Rosalind Franklin was going to present her latest DNA data to a group of London scientists. Among the 30 people or so, one outsider had managed to sneak in. Mr Watson from the Cambridge team was participating and was very keen to get some insights to use when building models. He didn’t take any written notes, because his memory was sharp (according to himself).

Filled with new ideas Watson rushed back to Cambridge and started building. In less than two weeks they announced they found the structure of DNA!

The London team was notified and jumped on the train to pay them a visit. Rosalind Franklin took one look at the model and… laughed at them. Watson’s memory had failed him (after all). He had forgotten how much water was absorbed in the structure of DNA crystals. A very important detail that rendered their model useless.

Banned from the race

On top of the humiliation, Watson’s and Crick’s boss forbid them to continue. They had clearly stepped over the line when making use of someone else’s unpublished work. The fact that they worked on the same problem just made it worse. Not only did the Cambridge duo get kicked off the case, their model parts were confiscated and sent to the London team.

This charade gave the London team increased confidence. Building models was clearly a waste of time. After all, they had the best equipment and were happy to continue on their data driven path.

But the Cambridge team wouldn’t give up as easy as one might think. DNA was too important to them.

Watson and Crick decided to continue in secret. They started to look for other sources that might help them. A man called Erwin Chargaff was an expert on the chemistry of DNA, so they invited him to fish for information. They didn’t get along. According to Chargaff the duo was so self-centered to the point that they showed contempt for chemistry. He was convinced they wouldn’t get anywhere by just building models.

Despite his extreme dislike for them, he told the Cambridge team about his “Chargaff’s rule” which explained the relative amount of the four basic DNA ingredients; Adenine, Cytosine, Thymine and Guanine.

The solo American Linus Pauling started to get more and more interested in DNA. He even sent his son to work (read: infiltrate) at the Cambridge lab. In an attempt to get ahead of the game he also sent numerous letters to Wilkins, asking if they could share their data. But he never got a reply.

Around the same time the London “team” made an astonishing discovery. Rosalind Franklin’s graduate student Raymond Gosling takes the clearest DNA picture yet. Now famously known as Photo 51. The X-pattern indicated the ingredients were arranged in a spiral, what scientists call a helix. A photo that she intended to keep to herself for as long as possible. 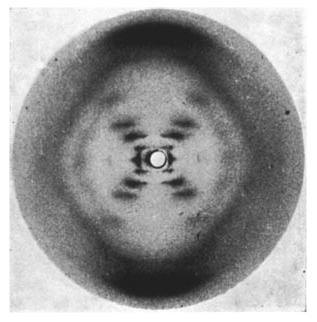 The famous Photo 51 by Raymond Gosling

Meanwhile, the American Pauling worked in the dark and thought he made a breakthrough. Filled with joy he sent his “proposal of the structure of DNA” inside a letter to his son at Cambridge. Who in turn showed it to Crick and Watson. They could immediately see that it was wrong… It didn’t fit the data at all and Pauling failed to explain what DNA did. This time around, he had blundered by trying to get the structure with too little information. But nobody had the courage to tell him. As a Nobel prize winner Pauling was like the pope of Science.

Another trip to London

Watson still felt the need to show the letter to the London team, to their relief. So once again he jumped on the train.

As Watson arrived at King’s College he immediately walked to Rosalind Franklin’s office to show her the letter. But the room was empty. Somehow he still managed to linger on long enough to be caught by surprise as Rosalind walked into her own office. It certainly looked bad and Watson was thrown out without much hesitation.

Watson continued down the corridor to talk to Maurice Wilkins instead, who was more welcoming. Especially after he heard about the recent confrontation with a common “enemy”. Wilkins was reclusive but decided to at least show Rosalind’s “Photo 51” to Watson. The cross! Wilkins thought it was a beautiful photo. Nothing of significance.

Watson however got super excited. As he entered the train back to Cambridge the photo was raising through his mind. This time he made sure to get the mental image down on paper. It so happens that his colleague Crick knew a bit of diffraction theory and had earlier explained to Watson that an X indicates an helix. Another clue.

He went back to Cambridge where Watson and Crick immediately started building a model based on the new information. They wanted to see how these pairs (A+T, C+G) would fit together. Maybe the shape of DNA would tell them what it did?

The standard procedure was to build a tin model, but Watson decided it would take too long, so he started to cut out some cardboard before it was time to go home for the night.

They came back on Saturday morning, on 28 February 1953. With the oversized cardboard puzzle pieces in front of him, Watson started to move them around. Trying to fit them together. Once he got the pieces in order, he realized the pairs looked identical in shape. Pairs that could be stacked.

In order to form a helix they didn’t only need to stack together, but also twist around. Slowly in their minds, the double helix structure of DNA emerged. If true, this would allow an infinite sequence that could easily be split in half - forming two identical copies… A self-replicating molecule. Eureka!

They jumped off their chairs filled with excitement and famously ran to their favorite pub “The eagle” next to the Cambridge campus. Where they interrupted the patron’s lunch and proclaimed:

“We found the secret to life!”

They had the idea. Now they wanted to make sure it was right, so they built a tin model as quickly as they could. Then cross referenced (pun intended) the model based on what Watson scribbled down after seeing Photo 51. Good news: everything fit.

The last thing to do was to notify the London team who made the same journey as they did once before. Last time the Cambridge model was completely wrong, which had boosted their morale. This time around, they didn’t laugh. The London team just needed a quick glance at the model before they realized they saw the answer.

“It looked right when you saw it. It was so brilliantly elegantly simple.” 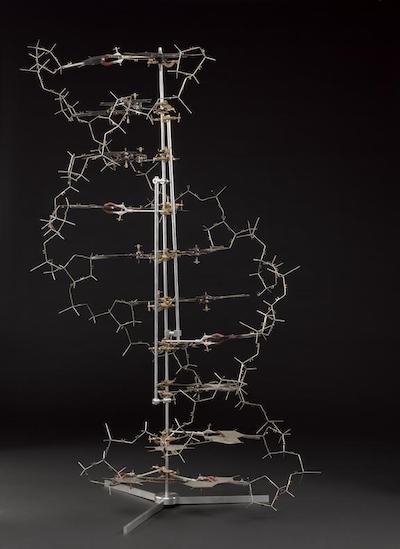 That’s the story of how two underdogs took two very simple ideas: 1) the ingredients go along in pairs, 2) together they form a helix. Then successfully combined these ideas into one magnificent structure. And just like that, Watson and Crick theorized their way to one of the most important scientific discoveries in history. They won the race.